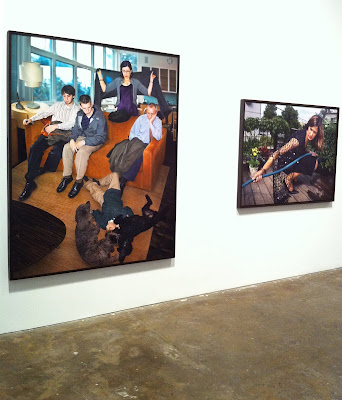 Bfreemore means getting out into the community and widening your experiences. So, instead of hitting the track on Friday, I walked with a co-worker to the Contemporary Museum to view the photography exhibition, Ben Gest: Commissure.

The Contemporary Museum introduces Gest through a short explanation of his process:

The goal of Gest's artful use of photo manipulation is not to enhance, but to emphasize emotion and create distortions that effect the psychology of the figure or figural interaction. As the museum mentions, this technique is reminiscent of Mannerist painting. Lady Madonna's elongated neck, lifting her face to the sky, her long spindly fingers playing against folds of drapery; a series of emotional movements, blended together to emulate the divine experience. Gest's emotional cues also exist in the spacial and anatomical inaccuracies of his images. A mother's enlarged hand rests on her child's back, a long forearm reaches up to replace an earring, a wife's sharpened fingers reach out to her elderly husband as he exits the scene. Yet in place of the divine, characters seem to quietly contemplate mortality as they chop carrots, tug on nylons, or water a roof top garden.

Before we were able to capture the human form on film, illusion of form 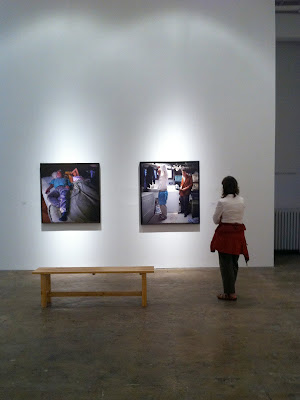 and emotion were captured with paint. Photography, in turn, has a long bridal train of painterly history married to its contemporary interpretation.

History aside, Gest's craftsmanship is true example of what the photographic medium is capable of today. Through digital manipulation, he adds and subtracts space and detail much like a painter would with a palette knife and brush.

Gest's sense of the tenuous interaction between skin and fiber grant the viewer an pause where they may quietly break from world and simply observe.

In the end, all Gest demands from his viewer is an honest eye and a thoughtful moment.

I highly recommend this exhibition to photographers, artists, or even just observers of the human condition. The technical qualities are outstanding and the storytelling is enigmatic.
Posted by Leah at 8:43 PM